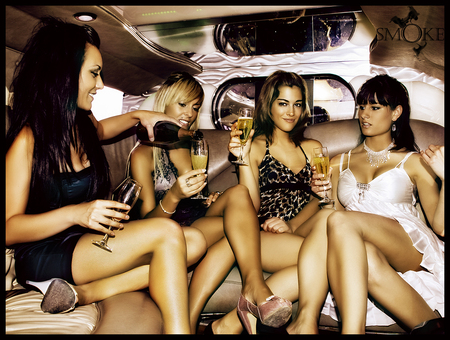 It’s 2011 and we women are still allowing our sexuality to be judged by society. We still allow the words slut, whore, bitch, etc. to be used to slander our names. And out of fear of being degraded and labeled one of those  titles, we keep our sexuality taboo and quiet. It’s time for change. We are standing at the origination of a powerful female nation. The pussy and its desire is nothing to be ashamed of. Just because a woman talks about the experiences of her pussy, does not make her any less of a woman. In fact, it elevates her to the epitome of womanhood because she accepts the spirituality, power, and influence her pussy has on the world. That’s why we have decided to take the word “slut” which is one of many words used to degrade women and claim it as a word of empowerment. We as women are no longer permitting others to use such words to define us. Rather, we’re choosing to redefine these words. We have that control and we’re ready to use it.

When a woman talks about how many lovers she has had or the fact she enjoys sex with different people, she’s labeled as something filthy. Other women may think that she lacks morals and the men may think she’s a sure thing but perhaps it’s something different. Perhaps she’s simply comfortable with her sexuality. Presuming such a woman lacks morality or would lay down with any man who’d have her does not agree with the statistics. Typically women who are comfortable with themselves, don’t believe that every man deserves the privilege. In fact, these women tend to have high standards for their lovers and and unwillingness to compromise them. These are very picky ladies but their standards don’t serve the purpose of sussing out some life-long mate.  However, she still might not want a relationship. Ladies, just because you are attracted to a certain man doesn’t mean that another woman is attracted to him. Especially a slut! We don’t want your man! Men, just because it is known we have sex and like it, doesn’t mean we will fuck you!

The world has fooled people to think women that who use their sexuality to tempt men are all whores who really fuck anyone. Not so! Sex or sexy is a business like anything else. Any media geared towards any subject is a business! Just because a person hosts a talk show about eating healthy, doesn’t mean when the camera’s off they actually eat healthy.  Also, there is a perception that a woman who uses her sex in any manner to create a business is not smart.  That she does not have a brain that’s why she uses sex. This is also bullshit! Just like every rapper isn’t really a thug or every athlete isn’t a talented idiot. It’s entertainment! It could be a character being sold for business purposes. There are rappers who are college educated and never been to jail. There are very intelligent athletes. There are very smart women who still prefer to pursue sexuality.  The media depends on the world holding on to  stereotypes and labels. It’s good for sales! That’s why Hollywood hires publicist to create an image. Who do you think spreads the rumors? Who do you think releases the video tapes?

Talking about sex is a business. Acting sexual is a business. Flaunting promiscuity is also a business. Just because my blog mates and I talk openly about our experiences and are comfortable with our sex lives, doesn’t mean we sleep with or blow everybody. I know people will love to think that. And because they do, we will get a lot of attention and admirers. Great! You have contributed to our intentions. Don’t think for a minute that we just sleep around from man to woman to man to woman. If that is a fantasy that keeps you a fan, cool! We enjoy the fame that comes from it. It’s our career.But that is not our reality. We have decided to make talking about sex a profession. We practice freedom of speech. We decide who we are intimate with.

I expose my self

A really open and liberated

had over and over

as if I was born via

The era of free love

Wide as the sea

You have to put on

and hours of oxygen

to get to my bottom

You would have to be

the size of 10 rulers

as a telephone pole

just to fill my hole

In a month’s time

I have sexually unwind

I have a private objective

I have yet to tell

and selective as hell

I love to use my mouth

out of a small bundle

sometimes I slip up and stumble

Giving to what I thought was a stallion

but that comes along with the territory

as most that are single do

a little spark over

after the sexual fury of me

I have a public image

I have to uphold

that has been sold

True I have done things
To live up to it

to many of dicks

I still have my grip

But I like for my admirers to think it

I have an audience

I refuse to not give them what

they came here for.

They scream and beg
They expect more

Living vicariously
through the feral part of me

with a white picket fence

If anyone had any commonsense

think that my pussy

In a 8 or 9 contestant cockfight

populate to be the size of

tired of being talked over

and attempted to be persuaded

who want me to be easy and

To tap the ass

and spill their load

But no no no

I have to keep it together

I
Maybe or maybe not

My bridal attire will be a ivory beige color

to live up to virgin white

I believe in a small portion of

and keep it tight