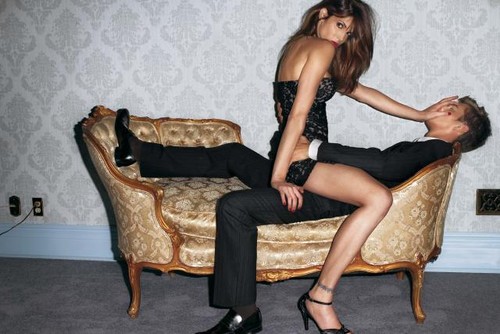 The first discussion that I have with a man, who is giving the serious relationship speech, is the need for sex 3x a day! Look, If I’m going to be in a commitment I need to know he can keep up! Now, if I don’t have a man, I don’t want to have sex all the time. Once or twice a month is enough and most of the time that’s with a vibrator. Believe it or not, I don’t like for someone who is not constant in my life to have that much access to me. I don’t want to be worn down and prefer to leave certain things in certain categories! I put consistent sex in the relationship category.

You all know it takes a whole lot of man to handle me and settle me down, so he has to be able to satisfy me in the bedroom. I like long sex sessions and I like it a couple times a day. Not every day but close to it. When I’m really attracted to someone who just the sight of him gets me horny, I might jump him spontaneously anywhere. My lust and emotions for him control me and I become impulsive! When I say anywhere, I mean anywhere! The grocery store bathroom, car, restaurant, movie theater, park, etc; I think you get the point! So I can’t be with a scary conservative chump! He has to be a freak just like me and he has to find that free-spirited life style appeasing. I don’t want someone who will do it because I want him to.A person can only fake it for so long, after awhile his real beliefs will appear. He will become insecure because he knows that being uninhibited is what makes me happy but it makes him uncomfortable. Soon he’ll start thinking he is not wild enough and I’ll cheat with someone else.  I need to know the truth up front, No need for delusion!

If I love someone I’m very sexual and open to new things. The more into him I am, the freakier I become. That’s always been me. However I’ve made bad decisions as far as mates are concerned. I was never satisfied with them. I maybe had one boyfriend in my life who could hang! That’s just horrible! I have to be with a sexual open-minded man period!

I wanna be kissed by you

Touched by you
Wanted by you
Seduced by you
Fucked by you
Sexually obsessed because of you
Contained, consumed and
emotionally possessed by you
Until I’m lost infinitely in your world
Please exemplify  your power over me
Proving by action you’re stronger
I will bow down surrendering.
A queen imprisoned by you
A uncontrollable wildness tamed by you
Your stroke will be my drug
and your dick will be my god
I will inhale all of you
A dedicated  addict
Most appreciative servant.
I constantly and consistently need to be licked by you
My pussy eaten by you causes an unforgettable high.
Each time your tongue caresses my clit,
I experience convulsions until I black out
Sweetly unconscious in a dream
Because of you, I’ve sold everything,stolen, and lied
just to encounter that orgasm over and over
I just have to be fucked by you.
Every part of my body entered by you.
Destroyed by you.
Let the recollection of my life be
that I passionately lived because of you
and faithfully died in your arms.