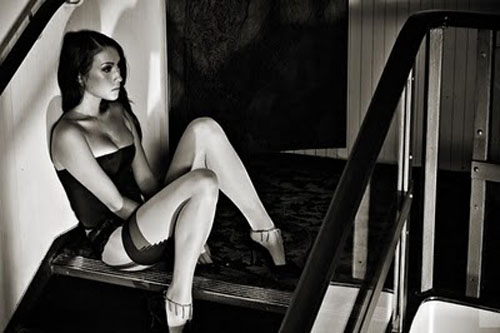 I was taught by the women I was surrounded by growing up, that a woman has her own household where she is queen. She keeps her love affairs private and doesn’t get others involved. She breaks off from her family, when she gets into a relationship. And that’s what I’ve always tried to do. I’ve wanted it to be just my man and I.  We have our home and life. We spend a lot of time alone together, to build a solid foundation of trust and security. Yes, family and friends are important. But, in the beginning of a relationship, they need to back off for a while, to give the relationship a chance to mature.

My mother taught me how to be independent and have my own. She gave me the tools I needed to go off in the world and build my own empire. She never wanted her only child to stay under her and miss out on personal growth. So that’s what I did. I went out into the world and built my own empire. I had enough jobs to support myself and take care of my household. I kept my family and friends at a distance and out of my business. I never kept a lot of girlfriends around to betray me and take what I worked for.  Things were pretty good for me, I was a young woman with her own.  I wanted to be the type of woman that a man would be with because I never let my mother and father, run my life. I never let girlfriends persuade me about my relationships.

However, I wasn’t prepared for the men that being alone attracted. You see, there is a dark side that independent woman need to know about. It’s those men who see a woman alone and distant from her family as weak and vulnerable. These men see her as an easy target for abuse and mistreatment. If her family is not around, that means she hasn’t been taught anything, she is insecure, and she can be easily dominated. No one cares about her. A man can come in and do whatever he wants.  He can be cruel and no one will believe her because he rescued her from the loneliness of her life. But who the FUCK said I was lonely? They thought that I must have low self- esteem because I’m a loner. They assumed that I would become co-dependent and always need them. Ladies, don’t ever fall victim to co-dependency. It’s like the worst illness a woman can suffer from. Your life continues to go down hill because of your fear of being alone.

This happened to me repeatedly. Some piece of shit, who assumed that I had a bad relationship with my family and I couldn’t keep friends. He thought, I can do whatever whenever to her. She isn’t going to do anything because I’m the only person she has. But no, I’ve always maintained a relationship with my family. And well, girlfriends, I tell them what I want them to know.  I wanted a relationship where the man and I, built an unbreakable bound together first before we invited people into our relationship. But, what I got involved with were insecure men who were looking for someone that had no other choice but to put up with their bullshit constantly. You know those kind of men that say shit like “Where are you going to go? Nobody wants you.” But my reply was, “My mother always told me, that the most important love I will ever know, is the love for myself. I want myself and that’s enough for me.” Or, they would use the line, “If you don’t do it, another woman will. And you’ll be alone.” My response, “I  was taught to love myself so much, that I can be by myself. So that other bitch can have your sorry ass!”

Us independent girls that leave home and don’t have our fathers around all the time, have to be more selective. Because I’ve dated a lot of possessive, controlling, schemers that weren’t looking for a companion; they were looking for someone who they can own and dominate by any means necessary. And in the absence of my parents, they thought I was definite yes. But, they fail to realize I was raised to think for myself, fight to the finish, be my own woman, and never let anyone run over me. Especially, no low life man! Independence is where it’s at!