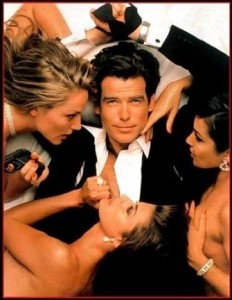 I don’t have a problem dating ladies men. As you can tell by reading my previous blogs, I’m going through that stage where I just want fun friends to hang out with. And, I don’t believe in searching for Mr. Right. I believe in living in the present and appreciating the excitement of Mr. Right Now. And when destiny decides, it will send Mr. Right in my direction at the right time. Everyone goes through stages at different periods. Unfortunately, most of my 20s I was married; so I didn’t get to experience the young life until I was 25. Hell I didn’t even have my first drink until then. I had one taste of the South Florida party life and I was hooked. Thank God I’m stubborn as a mule and strong minded, because everything that’s bad is easily to be obtained here. I just want to go out, get my drink on, and dance dance dance! And every now and then get my freak on. Some women are not happy unless they have boyfriends or husbands. I get it and that’s ok if that’s how they are. But, I’m enjoying my freedom stage and honestly I don’t know when I will give it up. This shit is too much fun to go back to being a wife.

That’s where the ladies man comes in. Yes I like the guys who love an assortment of women. I think it’s sexy when a man loves ALL the ladies. I watch these movies where the guy goes out with different chicks. He can charm the most elegant woman to the plain Jane woman; even the smart gals want him. It looks fun and exciting how suave and charming he is. Like James Bond’s smooth ass. Yeah He really knows how to get into a girl’s panties without making her feel like a cheap ho! But the problem is reality. There are not enough smooth ladies men in the world. Where are the dudes who know how to romance a woman right into the bedroom and get between them legs? Why is it most men are like a vile disgusting rap song? Ho this and ho that. Suck my dick bitch. Just because a woman doesn’t want to be a wife with babies doesn’t mean she wants to be talked to like a skank! Jeez! As much fun as I am, I’ve closed down shop because I yet to find a “playa” who has the gentlemen concept down.  Most men are rude and disrespectful which gets them no where and most of the time the sex they have is so so. And they gossip like bitches. But that’s another blog I’ve already written.

They only women who fall for them are these girls with low self -esteem who just want the cute popular guy to pay them attention. Not me! I gives two shits about Mr. Popular. Most of the time, I can’t stand him because he doesn’t know how to wow a real woman. The girls do all the work for him. He can’t even take fun rejection without getting angry and running off with his feelings hurt like a school girl. I real playa finds a smart mouth women to be a challenge. He doesn’t get mad or run away. He just steps up his game. Also, a real playa is cool, calm and relaxed. He rarely gets upset and always has a smile on his face. What’s there to get upset about when you have beautiful ladies at your beckon call? There is good and bad that comes with every lifestyle. He will have his troubled moments. That’s life! He can finesse his way out of any situation. He is still very masculine, independent, and dominating but gentleman like. You catch more lady bees with honey instead of vinegar.

I repeat myself constantly about my hate of the machismo assholes who think men should only be allowed to play while women sit around and wish for husbands to come rescue them; and fill them with screaming babies and house duties. Fuck that! These are the only men I fight with. If a woman thinks enough of a man to sleep with him, he should appreciate it; and get lost in the beauty of the moment. He doesn’t  worry about who she’s seeing other than him; especially if he has no intentions on being monogamous with her. That’s the problem with living in a place with a South American influence. The tradition is, women are faithful play things and men do all the playing. Well I’m an equal opportunity North American. And anything men can do, I can do better!

I like those men who see women equally; who understand that sometimes a woman just needs the occasional wine, dine, dance and fuck! A good playa knows women work just as hard to bring home the money to support themselves. So if he can get next to a woman, he is going to make it the best time of her life; and not be some boring schlep! He knows how to sweet talk her and he is always full of compliments. Women love to be told how hot and sexy they are. If a man pays attention to a woman’s hair, shoes, perfume etc. then she will melt like sugar. The guys I’ve been getting involved with are these full of shit brats who know they have many women; but they get off on making women fall in love with them to break their hearts. And when a woman doesn’t fall for it, they try to ruin her reputation; making her out to be some kind of cheap easy lay. Yeah I know how to pick’em! You know a man is a loser when he still thinks a woman performing oral sex on him is a big deal enough to brag about. Now that’s not a playa at all! Real sophisticated ladies men don’t think of oral sex as the exception. It’s just ordinary sex to them.  And if eating a lady’s pussy is what makes her have a wild, crazy, mind blowing orgasm, that’s what he’ll do. He feels his main job is to make her smile and her panties wet every time she thinks of him. Ooh it’s nothing like having a body chilling flash back at the most inappropriate time. When he calls her, shes excited and anxious to do whatever he wants. Every other man she might curse out and give attitude, but when the ladies man walks into the room he gets the V.I.P. treatment. His nasty freaky sex game is unstoppable. Ooh I just love a man that can make me scream. He says the nastiest things but only at the appropriate times. He is respectable and confident. He demands his women to be respected in public.

I can go on and on about my want for a ladies man. But this isn’t the 1950’s where men like Frank Sinatra and Dino ruled the masses. Now women have gotten use to the classless male population. Yuk!. It scares my freak into remission! I rather sit home and watch the characters that are written to lady charming perfection.

When I think of him

I think of his pants sweeping his thighs

The caressing of the silk

the material surrounds his length

Touching further the tip of his shaft

And roll back & forth

it rises and hardens

making love to the seams

Damn I wish I was his pants